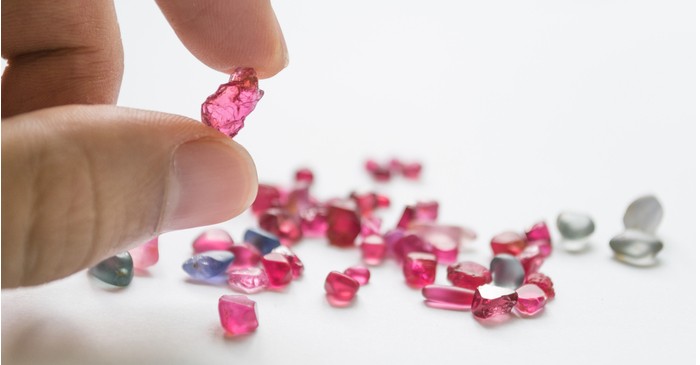 Spinel is a hard magnesium aluminium oxide that has only ever been used as a gemstone. Over the years the gem has often been confused for the gems ruby and sapphire. Spinel gems come in many different colours such as red, rose pink, deep violet, blue, orange, yellow and black.

Spinel is named after the Latin word ‘spina’ which means thorn. It was named this because the gem had crystal like points. The word spinel also comes from Greek word ‘spark’ which referenced to the gems bright colour. Ancient mines in Rome and China produced gems for the royal courts; in amongst these gems and metals they were producing they used to also produce spinel, although they often confused them for more precious gemstones like rubies and sapphires. In ancient times, the mines in central and Southeast Asia generated remarkably large spinel crystals. These gemstones soon became known as the ‘Ballas rubies’ and were quickly the treasured property of the emperors and kings. Majority of the worlds most well-known ‘rubies’ are in fact spinel, with one of the most famous one being the ‘Black Prince’s ruby’. As the name implies, this is a red gem which was once thought to be a ruby. The ‘Black Prince’s Ruby’ was attained by Edward, the Prince of Wales in 1367. It was set into England’s state crown and is currently being held in the Tower of London. Spinel gems were first found in the 14th century in Spain and used to be owned by a series of Moorish and Spanish Kings before Prince Edward had taken it in 1367. Since Prince Edward had taken the gem, many other English monarchs began to also treasure spinel gems, such as Henry VIII.

Spinel is traditionally found in Afghanistan, Myanmar and Sri Lanka. Recently spinel has been discovered in Africa, Australia, Russia and Vietnam. These gems are not usually mined from hard rock primary deposits, but instead from alluvial or placer deposits where eroded materials are washed downstream.

The modern era of high glamour and exquisite fashion attracts buyers towards these rare coloured stones. One of the most popular is the Hope Spinel that is a 50.13-carat rose-hued gemstone, a part of the British collection, generally classified by the Swiss Gemological Institute as "the exceptional treasure" due to the rare cuts, transparency, size and colour. The stone was auctioned by Bonhams in September 2015, where the bids came from around the world - online, in person and through phone calls and it fetched $1.4 million. In general, its price can be up to $2000 a carat.

How to invest in rare gemstones?

How to invest in rare gemstones?, Gemstones have...