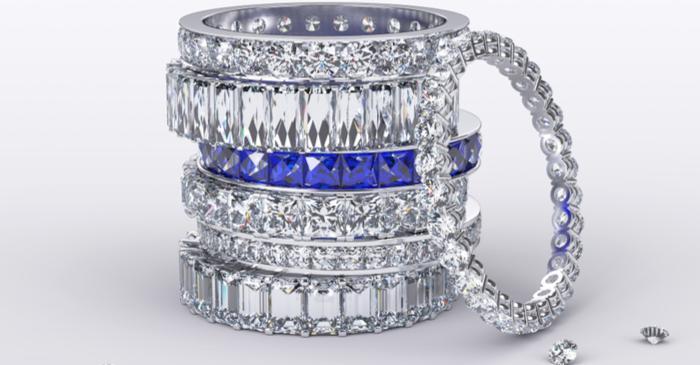 There has been a growth in demand for natural stones as in every 10,000 only one gets the gem quality structure, which can be recognized for the rare colours, intensity or colourless appearance. In 2019, the demand for a coloured gemstone is expected to increase.

In the last decade, the overall appreciation was approximately 70 percent which means each year the growth was about 12 per cent.

The price of fancy coloured stones increased 0.4 % in the third quarter in 2018 as compared to the previous year, and pink coloured gained 0.5 per cent in the same quarter, while, vivid blue ones outperformed all the other types of stones and had overall growth of 8.5% in the year.

Recently, a 28-carat ultra white diamond was found in Australian mines. It is an octahedral stone, unique in size, beautiful looking with great shape.  It was found by Rio Tinto Argyle mines ( in the east Kimberley), which has been operating since 1983 and is at the point of shutting down in the next year.

It is a miraculous stone and the miners are seeking eligible buyers for it. It will be auctioned in Belgium, Antwerp and can get millions in the sale.

Although the pink gems - the Australian mine, which is the source of over 90 per cent such pieces is set to close in 2020, the demand for pink ones is less as compared to coloured gemstones like  Kashmir sapphires.

The blue ones are becoming the most desirable in engagement rings, which was first marketed by De Beers through the Diamondsare Forever campaign.

The recent Met Gala red carpet event was dominated by such stones. New designer jewels were showcased by the participants and the top attractions included the shoulder-dusting earrings, men brooches and necklaces with large centre stones.

There were many designs with rare geometric patterns and many participants had the colourful cocktail rings on multiple fingers. Jennifer Lopez endorsed the crystal gown where she wore a necklace with 65.32-carat sapphires – the Purple Dragon.

It was made with central purple sapphires surrounded by other stones and pear-shaped stones that were all set in platinum.

Tiffany and Cartier were worn by many celebrities on the event. The supermodel Bella Hadid had jewellery matching gloves.  Kashmir sapphires have a strong track record of trade where clients from across the world are eager to get it.

Recently a late 19th century and early 20th-century item were put on sale in London and it was one of the first auctions of the stone. The 17.43 carat Kashmir sapphires earned $944,713 higher than pre-auction estimates of $521,440.

Similarly, there were other jewels of the gemstone which were able to gain higher than the estimated value. A transformable diamond - sapphires necklace gained $375,713. It was designed by Grassy and had 34.59-carat detachable gem. Its pre-auction estimation was in the range of $156,800 to $235,200.

To find out more about sapphires investment, check 99 Alternatives at (http://www.99alternatives.com).