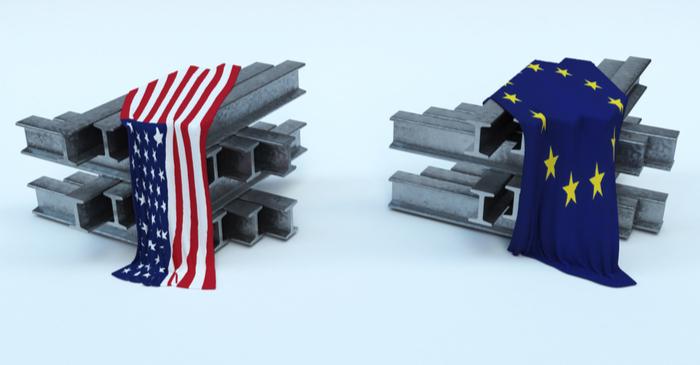 Last year controversy over trade relations were ignited with the announcement of US levies on steel and aluminum.  The metal duties are up to 25 per cent and in retaliation EU imposed taxes on imports worth 2.8 billion euros.  It is expected the announcement of 25 per cent tax by US President on imported cars would add extra 10,000 euros to overall price of European vehicles. EU is drafting a number of policies in response to the threat of increase in import duties on cars. The experts are also preparing to adopt a blanket approach where the EC announced to impose 25 per cent on more than 20 different types of steels ranging from hot-rolled to cold-rolled, rebars and other railway material shipments, which will remain till July 16, 2021. Latest reports claim 26 types of steels will be covered under the latest EU definitive measures.

EU is expecting to get more number of restrictions from US on imports, even though,  the deal made on July 25 last year, targeted to work towards zero tariffs and zero subsidies, to reduce barriers in trade in the non-auto sector. The European Union is expecting to impose tariffs on US goods worth $20 billion euros, if president Trump imposes tariffs on EU auto parts and cars.  The latest modifications in import items and duties have not met with universal approval but are popular among steel producers.

EU is preparing a draft to get the list of imports from US, which can be added into the $20 billion euros for rebalancing. The Trans Atlantic trade tensions continues to increase amidst US-Sino trade truce, where the US administration is preparing to take trade measures against close partners, allies and disrupt the overall purpose of such agreements.

The metal  was under pressure in other regions as well, where the Turkish steel was hit by the detention of American pastor Andrew Brunson, who was released  in October but the US administration announced it will double the section 232 tariffs on it, in case of imports from Turkey. The changes will increase duties from 25 per cent to 50 per cent on steel and 20 per cent on aluminum.  Earlier, duties were imposed in March 2018, where the imports of Turkish produce were down in the first six months of 2018 by 56 per cent as compared to 2017. London based Turkish traders said the export markets have almost disappeared and local market hardly exists, hence, this created no market situation. India has been in talks with US over tax exemption and is expecting to get 25 per cent and 10 per cent exemptions on both metals, respectively.

Simultaneously, the metal news claim the Chinese iron orefutures hit one of the highest in 10 months where copper and zinc were at highest in 2019. Japan is also preparing to produce crude steel in 2019 where it is facing operational issues and Japan’s ministry is expecting the output to drop 26.31 million tonnes, in the first quarter in 2019, due to such issues.

To find out more about steel investment, check 99 Alternatives at (http://www.99alternatives.com).