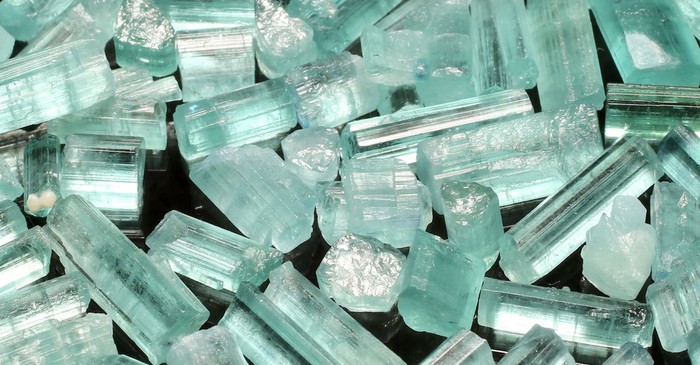 Paraiba has great incandescent appearance and was initially found only in Brazil mines with high copper content. Tiffany & Co has been using these stones from Brazil in their jewelries and these are widely used by US jewelry brands. One such Tiffany & Co design was an earring worn by Hollywood actress Salma Hayek at a red carpet event. These stones are worth US $16,000 per carat, whilst, most such diamonds are valued in the international market in the range of US $5,000 to US $6,000 per carat.

Tourmalines can be found in diverse colors and variety. Some of the stones contain variation across the cross section and color can be of rainbow with a number of color combinations.  One of the varieties has triangular pattern.
In general, tourmalines are low cost gems and some of the famous ones are lab-grown. One of the largest mining sites of such stones is in California, which was initially found by Native American. In US, some new sites have been discovered at San Diego County and Riverside.

Paraiba was discovered in 1980 and was identified by the blues and green electrified colors, which were unique and sometimes, in vivid colors. These can be found in popular jewelries worn by the actresses Salma Hayek, Taylor Swift and Emily Blunt, and are very much in demand with collectors.

The mines of gem quality Paraiba tourmaline can be found in Africa and Brazil. The stones form Pegmatite, which is formed in rare temperature, pressure and humidity, within the mines of manganese (Mn) and copper (Cu).
These expensive gemstones can be found in the North-Eastern state of Brazil, Paraiba. Parazul mines and Paraíba Tourmaline mines are some of the largest producers of such stones.

These stones are mined by some of the poorest miners working under tough draught prone mining locations, facing risks of tunnel collapse and poor air posing severe health risks.  The mines of these colorful gemstones are widely predisposed to illegal mining, money laundering, frauds, bribing, smuggling and racketeering.   The Brazil mines are almost in depletion stage and the local government has closed almost all such mines. The supply stopped in these mines and alternative source of the gemstone have been identified in Kenya, Madagascar, Tanzania, Nigeria, Sri Lanka, Afghanistan, Burma and Mozambique.

To find out more about Paraiba Tourmaline and other gemstone auctions, markets, mining, price and sales, click 99 Alternative – (http://www.99alternatives.com).