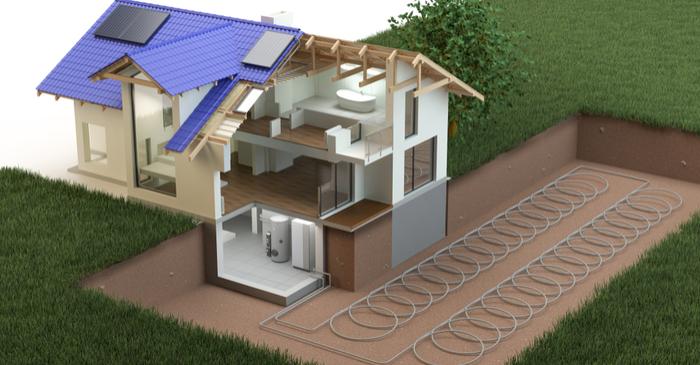 As per Danish researcher Brian vad Mathiesen carbon emission from residential heating can be reduced if EU agrees to ban setting up new oil and gas boilers by 2030. The researcher said solar PVs and pumps are expensive options, and most common people cannot afford to set up such units, while, just by promoting thermal infrastructure, at least 50 to 70 per cent of households in EU, can get cheaper electricity.  He recommends banning oil and gas boilers to free up gas. He proposes work towards harnessing waste power in the EU for improving its production.

Geothermal energies can be used in GSHP to produce consistent temperature. It makes use of a motor, which can extract heat from the ground and distribute it across the building. The mechanism pulls liquid that has the temperature of earth and circulates the liquid carrying the temperatures from geographical source to travel back and into the house.  In winters, the liquid heats up the building using underground heat. Such mechanisms offer carbon free methods to keep the house warm in winters and cool in summers.

A number of people are dependent on fossils for heating their homes. The method of wood burning leads to increase in pollutants in air. A study found the regular use of wood burning leads to increase in production of airborne particle matters, which can enter the lungs and cause chronic bronchitis. Instead of using such methods, the way of ASHPs can provide cleaner heating. It, basically, contains a compressor and two copper tube coils, which transfers heat. The liquid refrigerant sucks heat from the air and evaporates. Direction can be reversed for shifting from higher temperatures to lower temperatures, where it requires just a plug-in to get the effect.

These are most effective ways to reduce power consumption and use greener energies. These can provide room to room control and also reduce humidity in the room.  It reduces electricity bills and the method offers environmental friendly energy production.

There are many countries promoting WSHPs for fulfilling the power requirements. Recently, a large WSHP scheme was developed where heat from river Clyde could be taken to produce and supply hot water to nearby regions.  In 2016, £1.6 million was provided to fund a project in Lerwick. The project was based on seawater heat and it was able to fulfill heating requirement of 225 homes, through the existing system.

In Greece, there are no geothermal power plants but now the country is relying on using such energies in the agricultural sector. Greece has many areas suitable for geothermal explorations but in the last four decades, it has been using such heating only for bathing and farming sectors. Some new methods to use it have been developed, where it can be used for the cultivation of spirulina, or for direct heating of public buildings and settlements. Netherlands has the system of optimal use of natural green energies, where the energy can be harnessed for plant growth at a low cost of production.

To find out more about GSHP investment, check 99 Alternatives at (http://www.99alternatives.com).