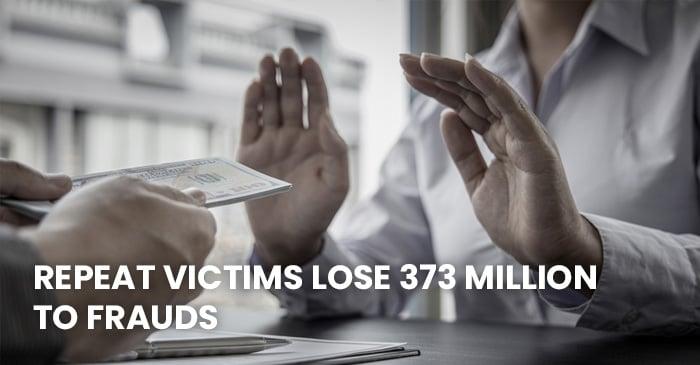 The National Fraud Intelligence Bureau (NFIB) released the statistics that found the repeat victims lost £373m in 2019-2020 (average approx. loss was £21K). The average loss, where at least one type of fraud was reported, was over approx. £84K.

Many investors suffered from Recovery Fraud, where the average loss who reported at least one such incident was 14 times the average loss of all groups of investors. The data also found that over 50 per cent of the victims denied taking victim support during the reporting.

In the last year, investors reported that after losing money to investment scams, they also got calls from organisations that claimed they would help reclaim the lost money. The buyers lived in different parts of the country, and the intelligence team suspected that the scammers were based in South Yorkshire.

The NFIB investigated the cases, and they arrested two suspects for scamsrelated to false representation and money laundering.

There is something very cruel about the criminals who deceive those who have already been cheated. The fraudster makes subsequent calls to the victims to extract more money from them in the context of previous fraud losses.

They make empty promises and create fake organisations to impact the sufferers emotionally and financially. But even the investors should remain alert and never give their bank details or pay further fees to those claiming to help you recover the lost money.

Law enforcement support provides vital help to the people who fall victim for the second, third or fourth time. For example, since the formation of the organisation Action fraud in 2014, the specialist victims advocate they have engaged with over 102K people, and only 17 of the individuals reported another scam.

Such data clearly shows that the investors are not apprising. The National Fraud Intelligence Bureaus need to work more to get reporting to prevent them from investing in other scams.

The organisation also created a list of people based on age and other attributes to establish a link between people and fraud types. It can help the police provide better protection against such frauds.

The data of men and women were examined, and it was found 24 per cent belonging to the age group of 40 to 49 accounted for around 58 per cent of losses.

The organisation also reported many losses through the advance fee, and over 50 per cent reported the type of cheating where they were contacted by someone who claimed they would help recover the lost money back.

It is one of the commonest methods where the buyer is communicated by a person who claims to be from a reputed law firm or a financial organisation or a solicitor or a government agency hired like some specialist of recovery fraud, and they have some basic knowledge about the victim's case of fraud.

They claim to be authorised to help the victim get back the lost money or some compensation for some initial payment. This kind of payment is often taken by those who belong to the same group of criminals who had previously targeted the victim, or they may get the details of the victim on the dark web.

As the victim pays the fee, the criminals may further request processing costs, and they may try to convince the victims will get the charges back once the money is recovered. Also, they connect it to legal aspects like the fees can be retrieved once the court orders it to be paid to the victim.

Finally, they may ask about the victim's bank details to pay back the money, but all such details are taken to extract more money in future scams.