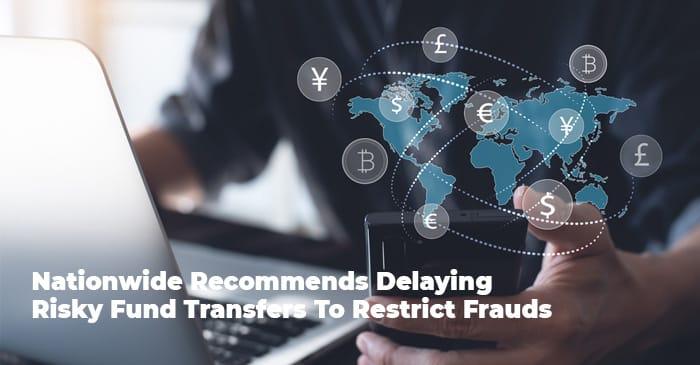 There has been a terrifying growth in frauds, and many lost their life savings and confidence to unsolicited dubious schemes. People of all age groups are falling victim, and in authorised transactions, banks are reimbursing only those customers who aren't to blame.

Financial organisations have been offering educational material to the clients to help them identify the risks, and they are also offering warnings and informing customers about the payments. They are using methods like delaying, filtering and stopping risky transactions.

However, the customer should be careful as even those who considered themselves aware and smart were cheated during the covid lockdowns in many different ways. For example - They were threatened by those who pretended to be the police. They asked them to pay a fine for breaking the covid- rule.

The Nationwide economic crime directors said, "We can handle the epidemic of frauds by delaying the payments that do not appear normal."  Risky payments should be delayed to tackle the loss.

The fast system of payment is designed to help the customer. Yet, due to scams, the total losses grew over 30 per cent in the first six months of the year compared to the previous. The scammers successfully extracted over £4m every day on average.

At the same time, there was a surge in those individuals by 71 per cent compared to last year who were tricked into giving away their earnings and details to fraudulent individuals. Nevertheless, the banks refunded less than 50 per cent of the total losses.

How to Avoid Being Scammed?

The most common way to extract was by transferring the money from the account holder into the imposter's who pretends to be from a reputable organisation like the police or bank. The authorities are considering various methods to handle it, and one of the commonest is to delay dodgy payments.

When the user authorises the payment, it is processed, and the money enters the payee account in minutes. However, if the transfer seems risky, the banks or other financial organisations can use various query systems and delay it.

In the last week of September, Nationwide launched a new scamchecker service to help customers avoid dubious transactions. In addition, it set up a new 24 hours customer service line where they could advise people to identify and avoid a loss.

The aim of initiating the service is to stop people from making payments to imposters. Also, the building society said if the customers get an all-clear to indicate during the transfer of the funds, but later on, if there is any scam, it will refund the money into their account.

At the same time, if someone refuses to follow the advice and then suffers a scam, the reimbursement would depend on other circumstances as determined by the industry, which means many would not get a guaranteed reimbursement. However, there are certain other provisions for those who are susceptible to such acts.

The executives at Nationwide said, "We need to stop the crime and not just try to reimburse the clients. Such actions are devastating for the financial and emotional health of the customer, and we are trying to take steps to protect our clients from falling victim to bogus bank transfers."

Overall the customer needs to find a way to avoid authorising such transfers, and they should be careful to spot a possible scam. The criminals used sophisticated, technically advanced tricks to extract money and ensure the customers did not contact the banks or other authorised individuals.

Furthermore, it is necessary to have additional protection through a backup service. The building society said, "We would try to find out how effective it will be, and with the help of combined efforts of the banks and the police, we may succeed in stopping the rise of such crimes."

If you suspect any such scam, report it to the bank and the police, call the card provider, tell them what happened, and inform them about the account you transferred the funds to. Then, they can either stop the payment or try to recover it.