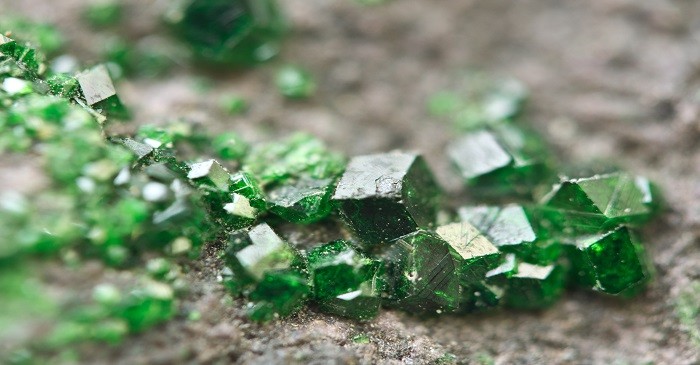 Bonham’s auction has been displaying rare jewels made up of colored stones including the Kashmir sapphires, Colombian emeralds, Sri Lankan violet topaz, Kenyan rubies and tsavourites. One can get greens rubies and tsavourite designed in gold, priced around $21000, at some of these auctions.  A ring in tsavourite (8 –carat) with 9-carat diamond embedded in 18-karat gold is worth US dollar 245,000 according to Sylva Yepremian, Los Angeles–based jewelry designer .

Tsavourite Garnet is a new green color stone resembling emeralds but is brighter and has a metallic effect. The stone was first discovered in Madagascar and are relatively new to precious stones luxury trade markets. Tsavourite are rare stones mostly found in Kenya (Tsavo National Park) and Tanzania (Arusha Region). Initially, in 1972 when Tsavourite mines were discovered in Kenya, miners individually tried to search for stones. Such stones were sold unheated, unpolished and unprocessed, and the revenue generated through such trade was low. The government recently started a value addition programme where polishing, cutting and heating of the stones will be initiated to fetch higher rates for the finished export-value stones. As per the Fraser institute reports Kenya has improved its position (placed 86 positions) in terms of global destination for precious stone mining.

Most rare stones from Kenya come in unheated form and experts believe they are undervalued, although, rubies and tsavourite are unusual stones. Kenya has mines of many precious metals - gold and gemstones which includes the tsavourite, rubies and blue sapphires, where miners sell stones in uncut form. In 2016, a mining act was introduced to promote progressive mining where gemstone mining and trade can generate sustainable income and immensely contribute to the economic development of the country, in which, the government funded Sh100 million in the new processing centre in Voi, Taita Taveta.

Mining provides jobs to 30 million miners and some 15 years back about 10 million miners were employed in the sector.  The fair in July 2017 held by the Association of Women in Energyand Extractives in Kenya was aimed to boost the mining sector and reestablish Kenyan mining as a hub of precious stones.  Even though the sector has some of the largest stores, it gives less than 1 per cent of the total  economic output and the local government  is planning to install new regulations to enhance the structure and management in the sector to attract more investments and improve the trading.

The country faced as number of issues related to mining sector where regulations are unable to restrict illicit trade and smuggling of precious stones out of the country. The cabinet secretary of the ministry of mining in Kenya, John Munyes, said the new plan to promote processing of gemstone and value addition will increase revenue through precious stone mining and gemstone deals.

The gemstones which will be locally processed and traded include the tsavourite, blue sapphire, yellow tourmaline, ruby, green tourmaline, aquamarine, amethyst green and red garnet and aquamarine.

To find out some more details about Tsavourite auctions and investment in precious stones,