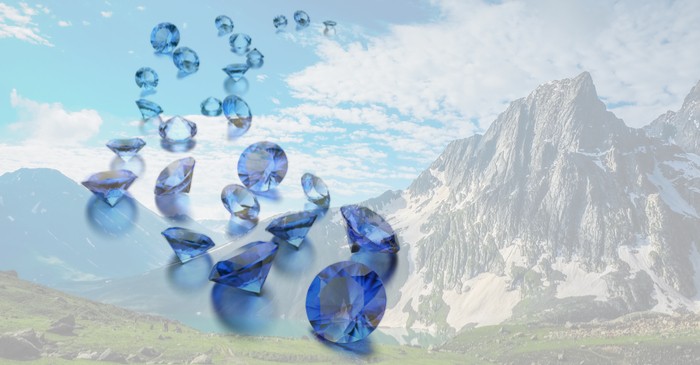 In the class of rare gems, sapphires, rubies and emeralds are priced higher than diamonds.  In 1980s, about 70 per cent of the total production of sapphire in the world came from Australia.  Globally, Kashmir sapphires are rarest, most classy and desirable of all colored gems. An auction to be held on July 17 at Antiquorum in Monaco will showcase unheated Kashmir Sapphirewith white and gold diamond bracelet, which is a 19-octagonal cut sapphire of 61.5 carats, mounted on platinum and gold (white gold). The approximate value of the sapphire is expected to be in the range of US dollar 1,983,478 – 2,916,880.

Richland Resources Ltd is the company planning to restart mining at the Capricorn site as it obtained a six month loan facility of £300,000. The company believes the mines have higher potential to get sales as the market for sapphires is improving and there is lot of scope in gemstone projects.

Kashmir Sapphires were first discovered after an avalanche in the kudi valley in the Himalayan pass, Paddar, in 1881. These stones are mostly colorless to dark blue. Later the Maharaja took control of the mines and the assets were almost depleted by 1930.

In 2009, one 16.65 carat Kashmir sapphire was sold for $2.396 million at Christie’s Magnificent Jewels auction in Hong Kong, where the value of one carat was $144,000 – which was highest of all sapphire auctions.

The Australian sapphire comes mainly, from Central Queensland Gemfields, in shades of blues, yellow and sometimes, green.  These gemstones have been mined for more than a hundred years now, since it was discovered in 1870. The stones belong to Capricorn SapphireMines in the Queensland and it is assumed that these stones were brought here during volcanic eruption. In the previous years, the group reported sales of up to US$1.8 million. The mines faced issues due to adverse weather and maintenance costs. Hence the operations were suspended in December 2017 and now some new strategic modifications have been made in the company’s mining operations, which will restart in a month.

The Treasure State - US

Montana or the Treasure State contains sediments of many precious metals and stones, which includes the sapphires. These were first discovered in 1860s and millions of stones from Montana have entered the jewelry markets.

Sapphiremines are also located in North Carolina and these mines mostly contain moonstones and sapphires. These were known as Star of the Carolina.

Madagascar mines of precious stones and blue sapphire were discovered in 1998 and active trading of sapphires can be found in Madagascar.

To find out more details about sapphires and global trades in gemstones, check 99 Alternative – (http://www.99alternatives.com).