Factbox - From sterling crises to Brexit, the tests of Bank of England bosses 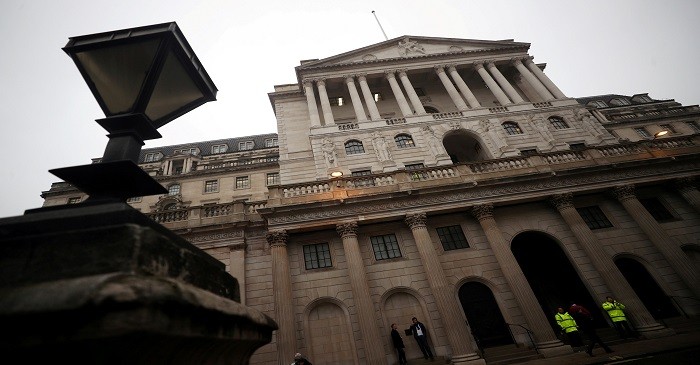 LONDON (Reuters) - British finance minister Philip Hammond is looking for a new governor of the Bank of England to replace Mark Carney when he leaves the central bank next year.

The position is one of the most powerful in Britain with responsibilities for steering interest rates for the world's fifth-biggest economy and overseeing the City of London's vast financial services industry.

Whoever takes over at Threadneedle Street in July next year will face the added challenge of Brexit.

Following is a summary of how some of the BoE's governors of the last 50 years have faced up to the challenges of the job.

Carney, the first foreign governor of the BoE, arrived in London from the Bank of Canada as Britain began to recover from the global financial crisis. The former Goldman Sachs banker brought his trademark policy of trying to guide markets and businesses on the likely path for interest rates.

Whether or not it was helped by Carney's message that low borrowing costs were likely to last, Britain's economy gathered speed and unemployment fell so quickly that he had to come up with fresh guidance. That was the first of several shifts that led one lawmaker to call Carney an "unreliable boyfriend".

Carney won praise for making a televised statement hours after the Brexit vote in June 2016, when government ministers were nowhere to be seen, that helped stabilise financial markets. He has also made banks set aside more money to reduce the risk they would bring Britain's economy to its knees again.

As the BoE's chief economist in the 1990s, King was an architect of its inflation-targeting regime, which proved the bedrock of Britain's economic growth after the pound's exit from the European Exchange Rate Mechanism in 1992. As governor, he allowed inflation to surge past the 2 percent target to a high of 5 percent as the global financial crisis hammered Britain and the value of the pound.

King was criticised for not seeing the crisis coming. Once it broke, he led the BoE into a huge stimulus push, cutting interest rates to a historic low and ramping up greater government bond purchases, as a share of economic output, than any other big economy. King never forgave the banks and said in 2011 that they had "put profits before people", straining the relationship between the industry and the BoE.

Lifelong BoE economist George took the reins of the central bank in the aftermath of Britain's exit from the ERM. As Britain's economy stabilised and then prospered, George got the nickname "Steady Eddie". Tony Blair's Labour government swept to power in 1997 and immediately gave the BoE the power to set interest rates. But at the same time the BoE lost its supervisory powers over the banking system, a move resented by George. His governorship coincided with a period of consistent and strong economic growth.

Banker Leigh-Pemberton ran the BoE during a period marked by financial liberalisation but also the failure of several banks under its watch, angering former prime minister Margaret Thatcher and culminating in the 1991 collapse of the Bank for Credit and Commerce International.

He also defended Britain's ERM membership even as the government raised interest rates to cripplingly high levels. Even though the BoE spent an estimated 1.5 billion pounds to defend the pound on Black Wednesday in 1992, Britain was forced into a humiliating exit from the currency system. Leigh-Pemberton won praise for steering the City of London through the "Big Bang" opening up of financial services.

Richardson's governorship spanned a time of industrial strife, rampant inflation and currency crises whose low point was the embarrassment of asking for a bailout from the International Monetary Fund in 1976. The BoE's prestige took a hit, and it became further sidelined after Thatcher came to power in 1979 and pursued a new monetarist strategy for the economy. Richardson, a former lawyer and investment banker, had a strained relationship with Thatcher.

Struggling to modernise its economy after World War Two and the collapse of its empire, Britain had to devalue the pound in 1967, shortly after lifelong BoE staffer O'Brien became governor. Speculators had attacked sterling's fixed rate through the mid-1960s and a growing trade deficit, rising government spending and dwindling foreign currency reserves meant the pressure to devalue the pound became irresistible. In the early 1970s O'Brien tried to boost Britain's banking system through deregulation, but combined with the government's attempts to pump-prime the economy, a credit boom ensued, contributing to a surge in inflation.

The aristocratic Baring, whose ancestors founded Barings Bank, was staunchly opposed to devaluing the pound. He believed it would decimate Britain's standing in the world economy. The earl - known as Cromer - repeatedly clashed with Labour Prime Minister Harold Wilson. Wilson reportedly told him that the history of the BoE "would end with Governor Cromer" if it defied the elected government. Cromer stepped down and the government devalued sterling in 1967. He later served as Britain's ambassador to the United States.