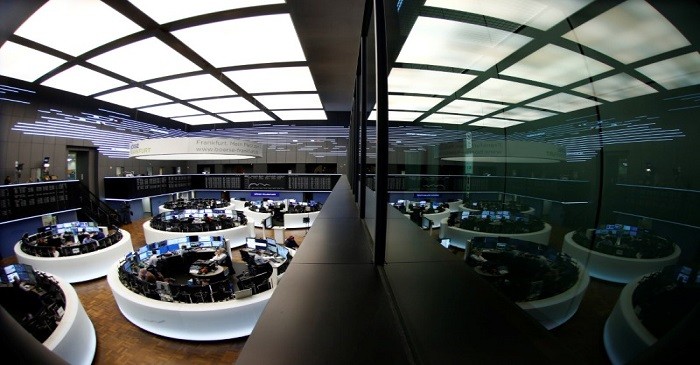 LONDON (Reuters) - Stocksand the dollar rose but gave up some gains on Monday after the U.S.-China trade war was declared "on hold", while in Europe Italy's borrowing costs climbed and the Milan bourse retreated as two anti-establishment parties got closer to power.

Wall Street was set to open higher, with U.S. S&P mini futures  up 0.6 percent, while the pan-European STOXX 600 was up 0.3 percent, hovering near 3-month highs and  London's FTSE 100  hit a new record, up 0.5 percent  following a positive session in Asia.

U.S. Treasury Secretary Steven Mnuchin declared the U.S. trade war with China "on hold" following an agreement to drop their tariff threats that have roiled global markets this year.

Mnuchin and U.S. President Donald Trump's top economic adviser, Larry Kudlow, said the agreement reached by Chinese and U.S. negotiators on Saturday set up a framework for addressing trade imbalances in the future.

Barbier de la Serre cautioned, however, that given the lack of details available about the agreement between Washington and Beijing, it was too early to call it a definitive turning point.

He added that a number of question marks, such as on the prospects for world growth, inflation and rising rates, should also keep investors on their toes.

As safe-haven demand for debt fell, U.S. bond prices were under pressure, keeping their yields not far from last week's peaks with the 10-year Treasuries yield at 3.072 percent, &lt;US10YT=RR&gt; near a seven-year high of 3.128 percent hit on Friday.

In the currency market, higher U.S. yields helped to strengthen the dollar about 0.15 percent against a basket of currencies while the euro dipped 0.1 percent to $1.1762.

Italian politics contributed to the pressure on the euro as the far-right League and the 5-Star Movement agreed on a candidate to lead their planned coalition government and implement spending plans seen by some investors as threatening the sustainability of Italy's debt pile.

"It is something that creates a lot of nervousness, but of course on the other hand one has to wait", ECB governing council member Ewald Nowotny said on Monday morning.

The Milan bourse started the day sharply lower but progressively clawed back losses and limited its fall to 0.8 percent.

Italy's 10-year bond yield rose to nearly three percent in early morning trade, its highest level since July 2017 but also eased back to about 2.28 percent.

Oil prices, which had initially held firm near 3-1/2-year highs on the easing trade tensions, edged down.

The market was also keeping an eye on Venezuela, where President Nicolas Maduro faces fresh international censure after his re-election in a vote denounced by his foes as a farce in the crisis-stricken OPEC nation.

Oil prices had been supported by plummeting Venezuelan production, in addition to a solid global demand and supply concerns stemming from tensions in the Middle East.