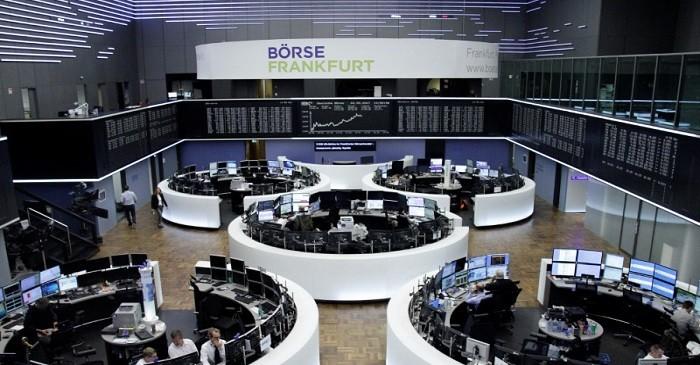 (Reuters) - European shares pulled back on Wednesday as a drop in crude prices stopped a long run in energy stocks and uncertainty over the creation of an anti-establishment government in Italy pressured the euro.

The pan-European STOXX 600 index fell as much as one percent, pulling back from a 3-1/2 month high hit on Tuesday, while export-oriented Germany's DAX, which normally finds support in currency weakness, declined 1.3 percent. Adding to the gloom was data showing euro zone economic growth slowed much more sharply than expected in May.

Top faller among national indexes was Italy's FTSE MIB, down 1.8 percent to its lowest level since early April, as a sell-off in the country's government bond resumed.

"Italy remains centre stage with its political developments," said Alessandro Balsotti, portfolio manager at JCI Capital. "The minister and economy minister choices and the actual creation of a government rather than new elections will be the drivers for investors in Italian assets in coming weeks."

An attempt by a little-known professor to become the country's next prime minister hit a hurdle following allegations that he had inflated his academic credentials.

The FTSE MIB has fallen more than five percent so far in May and was on track for its worst month in nearly two years.

Deutsche Bank on Wednesday lifted its target on oil major Eni saying political worries that have hit Italian markets this month could offer an opportunity to buy shares in the country's largest listed firm.

"Use the Italian macro weakness to buy," analysts at the German bank said.

The energy index, the biggest sectoral gainer so far this year in Europe, fell 2.5 percent as the possibility of higher OPEC output sent oil prices lower.

While the retailer's update included a second straight decline in annual profit and a 321 million pounds charge for a store closure programme, Morgan Stanley said the lack of an outlook or dividend cut could trigger a significant short squeeze in its shares.