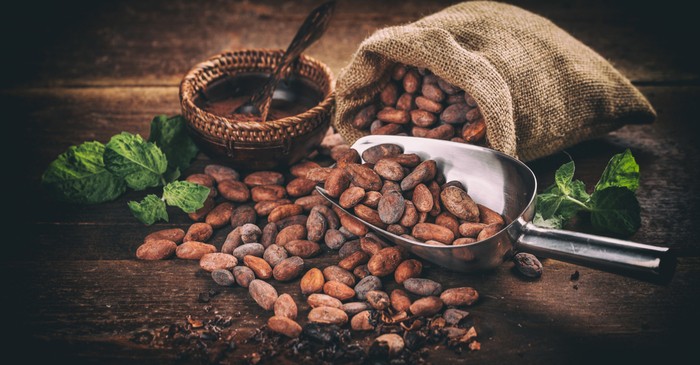 The demand for cocoa is rising at the steady rate of 3 per cent per annum, and emerging market (South America, China, the Middle-East and India) demand is accountable for the growing demand. Cocoais used as a key ingredient in many foods, beverages, cosmetics and health products.

The market is categorised into Latin-America, North-America, Asia-Pacific, EU, the Middle-East and Africa. It is assumed the demand will grow, in the coming decade, in the emerging countries where the change in diet and wealth has increased demand for such beverages.

The expansion of the market is expected to be in range 3 to 4 per cent and will attain US dollar 14,572 million, in a decade.  The growing applicability of dark chocolate in cosmetic industries and pharmaceuticals raises its demand.
Cocoacan be sold in the form of cocoa powder, liquid and butter, and the new product introduced in the sector is the cocoa acid.

About 60 per cent of the total cocoa demand is met by - Côte d'Ivoire and Ghana – the biggest producer of cocoa.   The cocoa produced by farmers are auctioned for exports in Côte d’Ivoire, and government regulates the sales, whereas, in Ghana, the government buys all the cocoa produced.

These countries have regulations for cocoa exports and have minimum prices set for the produce.  Currently, cocoa has entered a phase of supply deficit where the supply will be less than demand by 2020.
Cocoaplantation and agro-forestry

Cocoaagriculture requires healthy soils, pest control and adaptation to the changing climate.  These are mostly grown in shaded forests or agro forestry, which are some beneficial methods of agriculture and support biodiversity. The leading producer Côte d’Ivoire is planning to produce 50 per cent of the total global output by 2022. The region aims to grow 1 million ton of the cocoa by 2020 - 2022.

The local government is making agreements with multinational companies to increase coca bean production.  A number of forests have been cleared to keep up with the requirement for cocoa operations, which are, mainly, units of some of the chief chocolate companies of the world (e.g. Mars, Cadbury and Nestle).

Cocoais a tropical crop that requires new research on sustainability and changing environmental conditions. New research is required in the field of crop diversification and role of small and large plantations in improving production.

The current trends on chocolate markets involves the increasing demand for cocoa syrups and confectionaries, whereas, the consumption of cocoa has been linked to a number of health benefits.

In June, cocoa future rose 3 per cent – to three weeks high due to commercial capital investment in the Côte d'Ivoire and September price of cocoa stood at 63 pounds at 1840 pounds per tonne.

Cocoafuture has been one of the biggest gainer between trade war and concerns related to global warming those effects agricultural products where West African rainfall may determine the fate of crops and hence, traders are watching the El Nino impact.