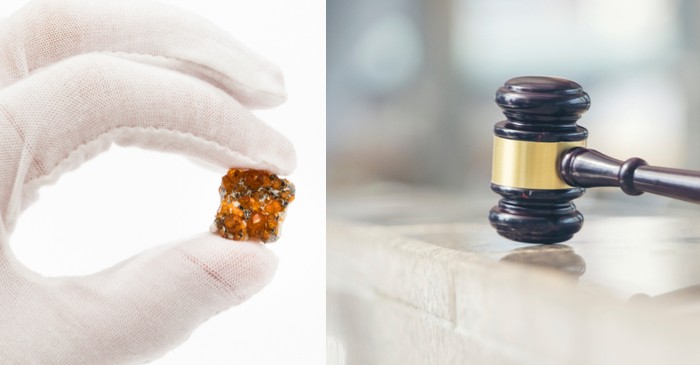 Garnets are expensive stones, used in jewellery and for industrial processing.  It can be used to cut steel and non -ferrous metals, and for surface cleaning. It can be found in natural colours -red, yellow, green, brown, purple, black, pink and colourless. Spessartite is bright orange gemstone mostly blended with other minerals and species, which gives it a red to brown colour.  Spessartite in gold necklace and rings have been showcased and worn at 71st Cannes Film Festival by Cate Blanchett, where she was showcasing the Temptations Collection.

These stones have been discovered in the US (Nevada, Colorado, New Mexico, Pennsylvania, North Carolina, and Virginia), Madagascar, Norway, Sri Lanka, Burma and Brazil. The Brazilian stones and the stones from the Madagascar have been cut into 100 carat stones which can weigh several pounds. Spessartites from Namibia are orange stones with smaller crystals and needles.

In 2013, spessartite in a gold necklace were auctioned by Bonhams for $62,500 in Los Angles, and the total weight of spessartite cabochons (mined from Tanzania) on the necklace was 382 carats.

Famous designer bracelet the Carpe Koi bracelet by the Van Cleef & Arpels is made up of 8000 coloured stones which include diamonds, tourmalines, sapphires and spessartite garnets.

Bonhams sold one of the spessartite garnets during 2016 auctions for US $11,250, which was also known as the ‘Large spessartite garnet,’ originally from mine deposits in Germany. Most large stones are unattractive or darker in shade but this one weighed 15.87 carats and had superior clarity and lustre.

The Paris Couture Week 2018, at the  Eiffel Tower, in July first week 2018  will showcase some leading brands collection of precious gemstone and metal jewelleries, where Souliers précieux clip  will be displayed, which has a 6.91 carat troidia cut spessartite garnet, cultured pearls, emeralds, and diamonds (the Quatre contes de Grimm collection).

These are found in large forms and can be differentiated from other stones due to the high level of magnetic susceptibility. These are part of the isomophorous series, which contain deep orange to mandarin orange colours.  Spessartite stones contain almandine, which are mostly red brown, although, the pale orange is the purest form. The stones are offered at auctions in unheated form as it does not require treatment or processing. Brightness of the stone is natural and not due to the presence of mineral impurities.   Sometimes, the stone hessonites are identified as spessartite.

The organ ones are rarest and found in California mines, where the garnets mined are more expensive as compared to African garnets, but these mines no longer operate.

Spessartite was, initially, found in 19th century in Bavaria and in 20th century, later, the production of these precious stones started in many countries including Brazil, Madagascar and Sri Lanka. Earlier, most mining methods were based on unreliable mechanisms and these stones were never sold at auctions.