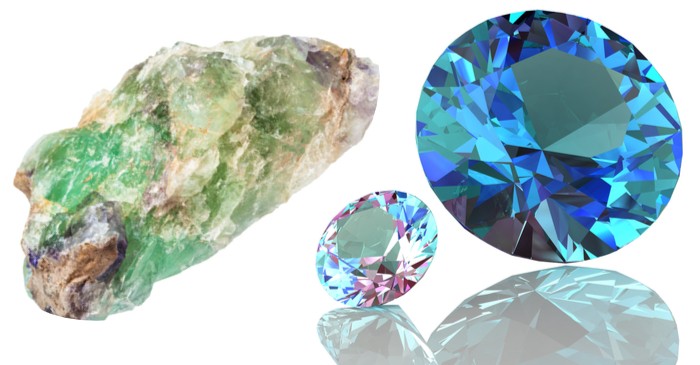 Dark green alexandrite was first mined from Russia in 19th century.  The stone was discovered in Tokovaya River in 19th century and named after Russian tsar Alexander II. These stones change colour depending on the light conditions and can appear red, purple and bluish-green in colour.  The price of one carat alexandrite is $15,000. Depending on carat, design, variety and colour, the price can vary from US $50,000 to US $70,000(these rates are mostly for stones above 10 carats).
Painite is the rarest mineral, with only two crystals found till date and the second scarcest gemstone on earth is alexandrite chrysoberyl.

A 21.41 carat alexandrite of Russian origin was sold for US$ 1,495,395, in 2014, at an auction. Russian alexandrite is rarest of coloured gems and the value of these stones can be more than ruby, sapphires and emerald.  The initial mines produced a variety of precious stones e.g. emerald, quarts, topaz, amethyst, aquamarine etc.  One of the last alexandrite was discovered in these mines in 1898, which is mentioned in the book by Edwin Streeter, who said the stone was emerald in the daytime and amethyst by night.  Now, the Russian mines are almost depleted.

The discovery of alexandrite mines in the Brazilian state of Minas Gerais started an alexandrite rush in 1987 causing deaths of people who tried to get stones from the mines.  Brazilian stones are not green as Russian but mostly purple or reds.
The stones were also discovered in Zimbabwe where the major mine operations were conducted in Sandawana emerald mines. Although, alexandrite has been found, there is no production at the mines.

Alexandrites are also found in Tanzania, Brazil, Burma, Madagascar and India.  The cost of stones varies significantly depending upon the geographical region from where it is mined and on the size, carat and colour.

Initially, buyers believed all colour changing stones were alexandrite but most precious stones change colour in changing lights, and even the lab grown stones have colour changing properties. Some new lab grown alexandrites are manufactured by gemstone sellers, through hydrothermal method, and it changes colour from blue to purple.

Some buyers get perplexed by the colour changing properties, although, the market value of lab grown stones is extremely low.

During volatile markets, investment in rare gemstone provides an alternative to diversify and reduce losses. The gemstones bought by wealthy and famous patrons are always in demand. International Colored Gemstone Association claims such rare gems will always attract attention of buyers in auctions. E.g. J.R. Dunn Jewellers in Florida have been showcasing a rare cat-eye Alexandritefrom sometime. In 2016, one of the largest alexandrite weighing (i.e. 429.60 carets) was showcased in Colombo for US $2-3 billion.

To find out about Alexandriteauctions, investment and mines, click 99 Alternative – (http://www.99alternatives.com).