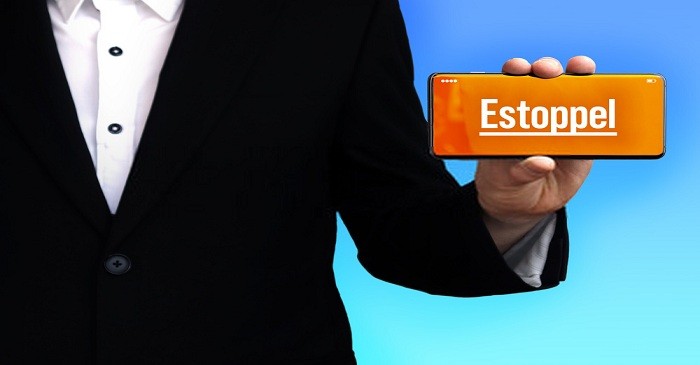 The word means a stop. It is a legal and general term used for obstruction or bar to one’s allegation or not accepting a fact that is against their previous allegation or denial or action.

For example-  Any written, verbal or implied contract by custom or behaviour must contain certain elements which are presented in the manner to make a legally enforceable contract where some contracts are based on strict statutory requirements. For all, there should be a genuine offer and there must be unqualified acceptance.

The parties are bound by such deals containing an acknowledgement of a state of affairs.

Whether or not, it was true. Such contractual deals will completely depend on the validity of the terms.

In some cases, there can be some bargain between the two commercial parties and the party may rely on representation by the other or suffer detriment and in such case, the injured party can plead estoppel.

Like if one party buys a car for commercial purpose.

The court states that they were induced to purchase the product by their assumptions and not by the other party.

At the time of entering any such contract, one should ensure they fully understand the nature of the transaction, the contractual relationship and also know the risks and practices described in the agreement.

If the customer confirms they agree and understand the terms of the emerging risks of the deal, they cannot complain later about it.

In case of a contract between the investor and the bank, it may include the term that - it was not open to the investors to say that he did not understand the nature of the transaction in the contract and second, he was induced to contract by an inconsistent earlier statement by the bank.

Where they did not read or understood the risk disclosure statement.