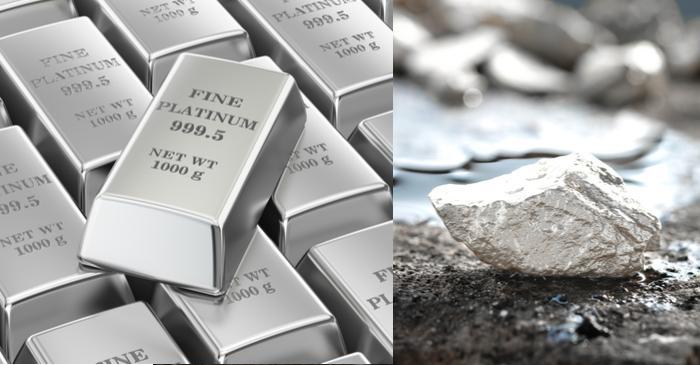 Platinum was initially identified as a metal which could sustain higher temperature. It was found between Mexico and Panama.

In 1783, a French chemist Francois Chabaneaus discovered a method to produce workable platinum but the quality made by him was inconsistent and it varied from one batch to other.

There were other metals in the orelike osmium, rhodium, palladium and iridium, which made it difficult for the chemist to get consistent properties.

These metals were discovered by English chemist Wollaston and he also designed a way to produce pure platinum at the start of 19th century.

In general, the metal is ductile and has a high melting point and it can dissolve in aqua regia – the combination of nitric acid and hydrochloric acid.

The metal also corrodes due to the presence of sulfur, cyanides, halogens and alkalis. There are multiple uses of platinum which is widely used as a catalyst in chemical reactions and vehicles to promote combustion of unburned hydrocarbon which passes through the exhaust.

It is also used in making jewellery and for electrical contacts where dire resistance wires and medical instruments can be made from the metal.

Jewellery - It is used as an alloy in jewellery making because it can be repeatedly heated and cooled without oxidizing and it resists tarnishing and is very strong. For over 2000 years, the metal was used in making rings and ornaments.

It was also used in Egyptian decorations in the 7th century BC, and China is one of the largest markets of platinum jewellery.

Fertilizer - It is also used to manufacture fertilizer ingredients.

Electronics and industrial uses of platinum - It is used as a key component in silicones, electronics, hard disks, glass manufacturing and sensors. It can be found in hard drives where there is high storage density.

It is reactive to oxygen, nitrogen and carbon monoxide and can be used to detect changes in the amount of such material in buildings and vehicles. There are various other things which are made from it like rods, sheets, ribbons and part of micro and mini machines.

In the petrochemical sector, it is used in the form of powder as a catalyst and can be found in several low voltage electrical devices and resistance wires. It can be found in cell phone circuits and computer hard disks. It is also hugely in demand as an investment.

It is widely used in making medical instruments like catheters, neuromodulators, stents etc. It is used in such applications due to higher durability, biocompatibility and conductivity.

Since it remains inert it is considered safe for implantation inside the body. It is also an ingredient in the cancer drugs and is widely used in the treatment of testicular cancer, lung cancer and other forms of tumours.

The demand for the metal is expected to grow in the medical sector. Like other precious metals, there are limited resources of the metal and the acutely limited supply creates the risk of depletion of the metal from ores.

To find out more about platinum investments, click 99 Alternatives at (http://www.99alternatives.com).