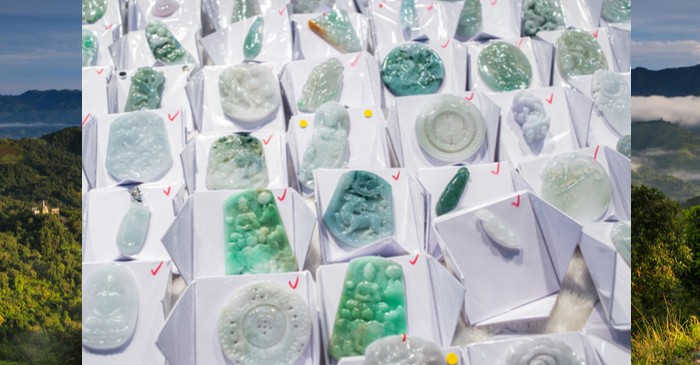 In June at Nay Pyi Taw at the 55th Myanmar Gems Emporium jade of value ‎€15 million was showcased. The auctions were attended by more than 3000 global merchants and jewelry brands from US, Canada, Hong Kong, Taiwan and China. Most precious stones and art auctions in China and Myanmar showcase jade statues, embedded jewelry and jade carvings that are mostly made in low cost stones nephrite.

Jadecan be translucent green or light green and used in jewelry, buttons, bracelets, cups etc. Some low cost varieties are used in plates, spoons, saucers, flower pots etc.  These items can be offered in the range of US$20,000 to US$25,000, whereas, the value of a Bonham jade and diamond necklace (containing high quality jade) with earring and ring, is in the range of US$190,000-260,000.

Jadedoes not have an international standard for grading and the price is not determined on such standards. One of the auctions in Asia emphasized on the translucency and color of the stone for higher price. To find the real value, one has to get it examined at labs.

Jadewhich undergoes treatment or has adulteration is priced significantly lower as compared to pure form, whilst, most natural jades are considered very valuable, especially; the demand is high in middle class and new wealthy buyers in China, who are buying raw stones from Myanmar.

Demand and Mines
The leading buyers of Jadestones Nicole Kidman and Jessica Chastain – wore the jade jewelry in 2014 Hollywood move premier and this led to rise in demand of the stones.  The traditional Asian buyers are attracted to translucency and western buyer look for cravings and purity.

Jadecan be found in nephrite and jadeite forms. Nephrite is of inferior quality as compared to jadeite. Value of jade in Myanmar mines is over $31 billion and many such stones are smuggled to China. These are highly admired in China due to antiquity. In 18th century many Chinese traders were going to Burma to acquire these stones and a small number returned. Many perished due to extreme weather and bad roads.

In 19th century roads were constructed to enable Chinese traders to come to the mines, although the king was unaware of the value and high demand of the stones in China. Mogaung was trade centre for jade and no tax was imposed on trade of such stones mined by the locals, traded in local markets.

To find out more about auctions and investment in rare precious stone jade click 99 Alternative – (http://www.99alternatives.com).